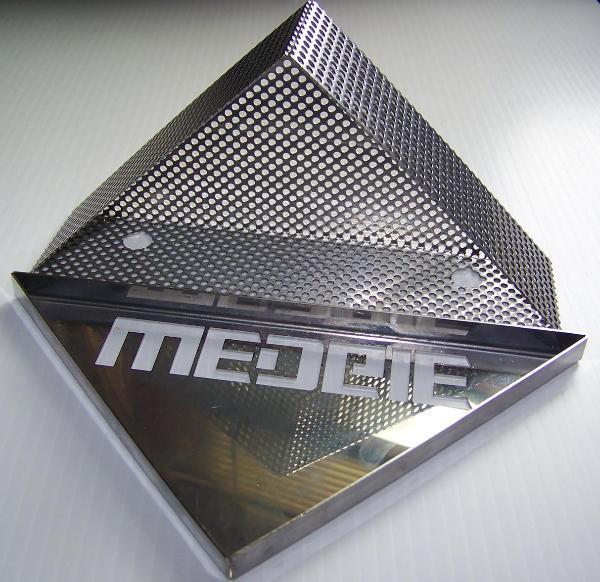 The wedgie tucks nicely into the corner of your grill to add more of your favorite smoke to your food. These also work well for cold smoking and adding smoke to a natural gas or charcoal grill.

As far as the wedgie goes, it's kind of a learning process. As an example, you wouldn't use it and cook a burger in 10 minutes and expect a lot of smoke. You would want to cook it at a lower temperature for a longer period of time. You could also sub it in a situation where you would use chips (without having to soak) and even replenish mid-smoke.
--------------
How many cooks would you get from a 20lb bag?
It holds approximately 1 lbs and lasts for a little over 2 hrs of intense smoke.
So a 20# bag will last approximately 20 smokes.
--------------
The unit empty weighs 11 ounces
Recommended to cold smoke for one to one and half hrs prior to grilling
Cold smoking can be as simple as lighting it, closing your grill cover and walking away. The grill will heat up, but not enough to really cook the food. Some people cold smoke the meat for an hour, then light it up and cook it through.
Another way to use is this is to light the Wedgie and their grill at the same time, but cook at a lower grill temperature. This gives the smoke a chance to get into the food before the food is completely cooked.
As I said there's a certain amount of experimentation to this. My step-father cooks 2 Turkeys on Thanksgiving every year. One, he cooks/smokes on the Weber and he could probably just substitute this instead of soaking chips. No mess, just fill the wedgie and cook. An hour or 2 later, check and refill if you feel it's necessary.
------------
The users so far say it gives very heavy intense smoke and they like that. Saves on pellets because the grill is off all during the smoke process.

Note: BBQPelletsOnline.com reserves the right to send a Lumber Jack branded Wedgie instead of the original WEDGIE

Save this product for later

The Gift Of Smoke 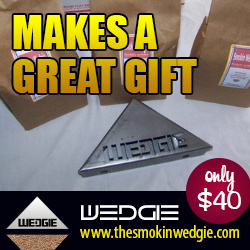